The Residents Assistance Fund has been providing confidential aid to residents who, through no fault of their own, have outlived their assets. Thanks to this fund, valued members of our community will always have a home at Horizon House. Below is a testimonial from the daughter of now-deceased Horizon House resident Jane Adkison, who greatly benefited from the Residents Assistance Fund.

The Life of Jane Adkison

Horizon House resident Jane Adkison moved to Horizon House in 1996. She was born in Fairmont, Minnesota and moved to the Seattle area in 1933, after her father died and her mother had to move them in with her sisters in Anacortes.

Jane attended Cornish School of the Arts, but even though she was a superb pianist, she didn’t like it; she didn’t want to concertize or to teach and that seemed to be what those studies were geared toward. She became instead a medical secretary and worked for years on First Hill. 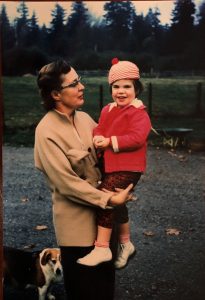 She married her husband in 1956. In 1957, they moved to the hinterlands of far-off Edmonds, and they adopted a daughter, Jane Sorenson, in 1959. Jane and [husband] divorced in 1983, and Jane and their daughter moved to an apartment, and then, when that building converted to condominiums, she moved again.

She developed macular degeneration and decided she needed to give up her car. Desiring to maintain what independence she could, she decided then to move to a “retirement place.” And she chose Horizon House for two key reasons: 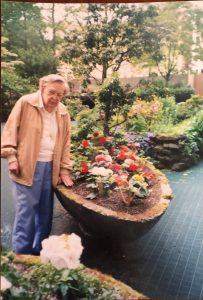 Jane came of age in the Depression. She lost her father at 16, and her family had to auction off a lot of their belongings to make the trip out west. What led to the rupture of her marriage was the reality that her husband had liquidated their retirement savings to spend on his “friend.” Jane knew what it was to worry about money. And Horizon House, by virtue of its Residents’ Assistance Fund, meant that even if she beat the odds (by age 80, she had had cancer twice and beaten it twice), even if she lived a long time, she would not burden her daughter with the cost of her care. She might not be physically independent any longer, but she could be financially independent, not relying on any one other person.

“I had no option before me if she had needed to move from Horizon House. I would have had to quit my work and the two of us would have had to subsist on her Social Security. Both of our health would have suffered, to put it mildly,” said her daughter, Jane Sorenson. “I could never have given her the excellent and tender care she received here, because no person, no matter how loving or how skilled, can care for a person with advanced dementia without losing their ability to function themselves.”

But the great staff here meant Jane’s daughter could relax, knowing that she was well-cared for. And what made that all possible was the Residents’ Assistance Fund.

Call today to schedule a visit!