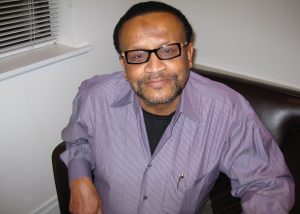 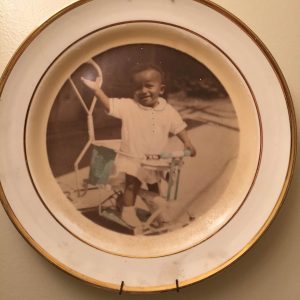 William “Bill” Womack was born on June 14, 1936 in Lynchburg, Virginia. Virginia was part of the deeply segregated South where African-Americans could only attend black schools and frequent a limited number of establishments. They were constantly aware of “white only” signs. Institutional bigotry and racism imposed restrictions on what they could do, where they could go or what they could accomplish simply because of the color of their skin.

Bill’s mother wanted him to get a head start on school and at the early age of 3 and 4, she had him mentored by a former school teacher named Mrs. Jennings who worked with him on reading and writing. Part of the reason his mother did this was because there were no kindergartens in Lynchburg for African-American kids at that time. This early education with Mrs. Jennings gave him a real foundation going into elementary school. Mrs. Jennings was a very important influence on his life.

When Bill was 5, there was a good family friend who was a nurse. In a conversation with his mother, he recalls telling her that he was going to marry this woman someday and that he was going to be a doctor. When his mother questioned how he knew at his age why he wanted that particular vocation, Bill said he just knew that being a doctor was what he wanted to be. From that point forward his mother never questioned that goal but encouraged him to pursue it.

Bill loved to go down to a local bookstore where he would spend time checking out new books and getting permission from his mother to purchase some. He especially loved fairy tales. His family placed great emphasis on education and he loved reading. His mother had an account at the bookstore that Bill was happy to use regularly. 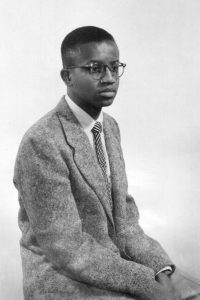 When desegregation started after the historic 1954 Supreme Court decision Board of Education vs. Topeka, Bill believes that no one was ready for desegregated schools and, based on his experience, white teachers did not care about African-American kids the same way black teachers did.

Growing up, Bill was a loner with not many friends. He focused on his studies and did not participate in sports or other activities but did enjoy singing in the southern Baptist church. He excelled in academics and was accelerated through a couple class levels (skipping first and sixth grades). He graduated from high school in 1951 at age 15 and was class Valedictorian!

Even though he was very young, Bill and the family decided that he should go on to a small college. Bill attended Lincoln University, an all-black college in Pennsylvania. The school was noted for its focus in math and the sciences, and also as a training ground for foreign students of African royalty, who Bill referred to as “African princes.” During college, Bill enjoyed being part of the Glee Club, where he sang soprano. He also belonged to a fraternity, but his first focus was his studies. He majored in chemistry and math. Once again, Bill excelled academically and graduated in 1955 at age 19 as the Valedictorian of his college class. 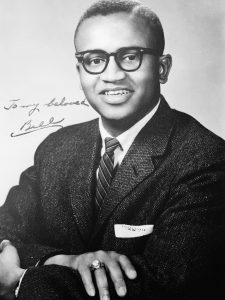 In 1954, the Supreme Court’s ruling came down in the Brown vs. Board of Education, which established that separate public schools for black and white students was unconstitutional. The timing of this decision could not have been better for Bill and opened up opportunities that would not have previously existed. Bill wanted to apply to medical schools and one of the very best was the University of Virginia, which was just beginning to desegregate. Bill applied and was admitted along with one other African American student. There were also three women in his class. At UVA, racial prejudice was muted and he did not experience open hostility. However the other white students would not sit with him, they would not talk to him and essentially they would have nothing to do with him. Similarly, that first semester, he did not feel encouraged by any of his university professors. In fact, one of his professors who taught bio-chemistry told Bill that the first year was a very difficult year and that he likely would not do very well. This was the first time that Bill ever had a teacher speak so critically of his academic abilities and he felt very discouraged and demoralized.

The social scene was also very challenging. In the entire city of Charlottesville, there were only two restaurants open to serving African-American students. There was also a movie theater they could attend but they had to sit in the back of the balcony, so Bill refused to go. Fortunately there was an African-American dentist whose family owned a nightclub where African Americans were welcomed. It was the only place in all of segregated Charlottesville where African Americans could go and enjoy themselves. The nightclub was a wonderful haven for Bill, as it was a chance to enjoy music and dancing, get to know other students, and be able to relax and entertain himself. 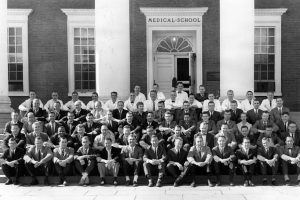 Throughout that first semester, Bill became increasingly upset at the omnipresent institutional prejudice that pervaded Charlottesville and the University. He talked to his mother and said he was not happy there and wasn’t sure he wanted to stay, but she encouraged him to stick it out and evaluate it after he finished his first full year of medical school. During that first fall, Bill was so discouraged, he actually applied to other medical schools in the northeast.

Despite his frustration with a faculty that discouraged him and a racist social scene, Bill decided to study even harder. Once again, he excelled and made the Dean’s List. He also did well the second semester and finally started to feel more acceptance from the other white students and the faculty. He decided to stay at UVA and continued to do well. He graduated and obtained his license to practice medicine in 1961. He was 25. 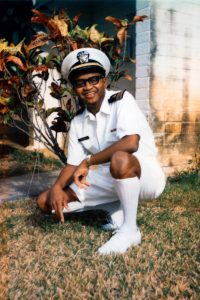 Bill was unsure where to apply for his residency program. One day, Dr. Ian Stevenson, the Chair of the Psychiatry Department, asked him to come in to his office and discuss where he was applying. Interestingly, Dr. Stevenson was the only one on the entire faculty who took any interest in Bill.

Bill shared that he was considering a medical center in the Dakotas, Iowa or Indiana. Dr. Stevenson discouraged those options and said he had a good friend at the University of Washington Medical School and encouraged him to apply. Bill took his advice, applied, and was accepted. Soon after he arrived in Seattle, he realized he was the first and only African American among all the faculty and staff at the Department of Psychiatry. However, he was determined to make a go of it. His first two years were in general psychiatry and his last two years of residency involved a child psychiatry fellowship which helped to shape his future interests in medicine.

After his residency, he joined the Navy and was assigned to active duty in San Francisco stationed on Treasure Island. He spent two years on Guam during 1965 and 1966. In Guam, he had the rank of Lieutenant Commander and was the senior psychiatrist on staff at the naval hospital. These were the Vietnam War years and he worked with US Naval, Air Force, and Marine military men and women who served in Vietnam, as well as other military personnel and civilians who had mental health challenges. 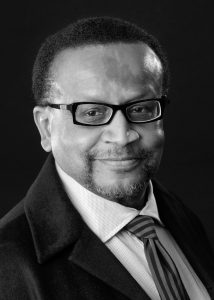 As part of his clinical practice, Bill worked with juveniles at Echo Glen, a juvenile penitentiary. In this role he was very involved in community psychiatry and juvenile justice. He helped develop systems that trained staff in how to interact with this challenging population and help these kids become successful when they were released from prison. He also worked at Children’s Hospital and created a stress management clinic for kids that helped alleviate anxiety and major headaches. This became a very successful program. Bill also taught young residents what they needed to know in order to get certified and gain competence working in child psychiatry issues in the ER, and in inpatient and outpatient treatment.

After 40 years, Bill retired from the University of Washington in 2007. He continued doing various consultation work and then fully retired at the end of 2015. When he looks back on his long medical career, he believes his biggest accomplishments include obtaining his license to become a doctor and practice medicine (a goal of his since age five); making the most of opportunities from the University of Washington Medical Center, which helped him enhance his medical career and have opportunities for lifelong learning; and reaching the pinnacle of his profession by becoming Division Chief.

In terms of race relations in America, Dr. Bill has seen a lot of change for the better. When he grew up in Virginia, everything was divided and there was considerable institutional prejudice and bigotry that was overwhelming and stifling on a daily basis. Bill also recalls those who did not like the fact that he became a successful doctor or would say that he was given his opportunities because of his skin color. To the contrary, Bill believes he had to work harder than other students in order to gain acceptance and be successful.

Bill does believe that Dr. Martin Luther King Jr. and the civil rights movement in the 1960’s and resulting changes in desegregation certainly have made a positive difference in our country but he believes there is still a long way to go in eliminating discrimination. He also acknowledges that these changes have affected his own life for the better. He is also a great believer that regardless of race, it is important for anybody who wants to succeed to take personal responsibility for their own life.

Ironically, he thinks that while there is clearly white privilege still in existence today, he, himself, received the benefit of white privilege himself when it was conferred on him from white friends who spoke up and advocated for him. Examples he cites include Dr. Ian Stevenson from UVA Medical School, who played a very meaningful role for him in helping to open the door at the University of Washington Medical School. Another instance involved a faculty member at UW who encouraged him to apply after his military tour of duty.

And, he sees privilege in the fact that he happened to be born into a family that cared deeply about education and supported him through grade school, high school, college, medical school and his residency program. Without that support, he knows he never would have had the successful career he enjoyed in medicine.

For Bill, he believes his life in the medical field has been rewarding and he is happy with what he has accomplished. And since arriving at Horizon House in 2015, he has come to appreciate and value being part of the community here. 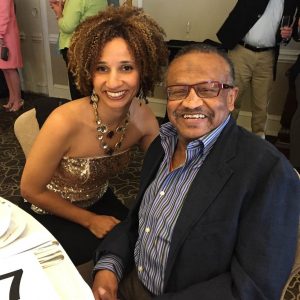 Bill is blessed with a daughter Lisette (pictured left), a wonderful son-in-law Will, and a grandson named Zane who is 16. Lisette created a digital story about her father in 2010, not too long after the two of them traveled to see Obama’s inauguration in 2009. Unfortunately, that trip didn’t turn out the way they had planned, but it did help shape the digital story she created. In the video, Lisette shares why her dad is one of her greatest heroes. You can see the video by clicking here.