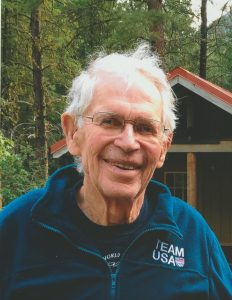 Editor’s Note: Shortly before Bob Cram passed away suddenly on July 29, Horizon House staff were preparing to interview him about his life story. His unexpected passing has left a void at Horizon House. We decided to go forward with his life story and met with his children Robin and Doug to gather information on his amazing life. Here is Bob’s story, written by Robin Hall, Doug Cram, and Dave Spicer. Wherever he is, we hope he enjoys it!

One of Seattle’s truly great artistic talents, Bob Cram, was born on November 25, 1925 in Seattle. He attended University Heights Grade School and went on to Roosevelt High School, where his artistic flourishes started to emerge. He was involved in the school paper and started doing cartoons while in school. He was also in the Roosevelt Review, a theatrical production, in spring 1943, where he played a comedic role. During his high school years, Bob also started skiing, which became a lifelong passion. He graduated in January 1944.

After graduation and with a war raging on, Bob entered the Army. D-Day was still six months away. He completed boot camp and then sailed to England and was part of the 66th Army Infantry Division.

After months of training, he and his platoon set sail on Christmas Eve 1944 on the SS Léopoldville. As the ship sailed across the English Channel towards France, sometime during the pre-dawn hours of Christmas Eve, a German submarine torpedoed the ship. The ship floundered and sank quickly. 2,223 men were aboard and an estimated 763 men drowned. Bob was one of the lucky ones and was rescued by British ship HMS Brilliant. That harrowing experience stayed with Bob for the rest of his life and he never forgot the men he trained with who were not as fortunate as he to survive that unspeakably tragic event.

Bob was sent back to Europe to fight in late January 1945 but missed the Battle of the Bulge. However, he saw other action, was wounded, and received the Purple Heart. 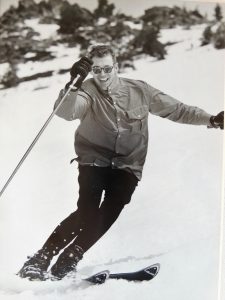 After the war was over, Bob stayed on and joined the Military Police and was stationed in Salzburg, Austria. This gave him an opportunity to pursue ski lessons and really enjoy skiing in the Alps. On one occasion he managed to obtain handmade ski boots in exchange for a couple cartons of cigarettes and some Army-issued chocolate bars and thought he got the better part of the deal.

In June 1946, he was discharged from his military service and returned home to Seattle. In September 1946, Bob enrolled in the Burnley School of Professional Art (now the Seattle Art Institute) with the hope of becoming a commercial artist. He was in school for four years and focused on cartoon drawings. After he graduated, he was hired by the Martin and Tuttle Advertising Agency. Bob worked on a number of accounts, including doing major work for Frederick and Nelson.

Bob met his future wife Martha through the Mountaineers. Martha was a Bush School graduate as well as a 1950 graduate from Smith College. Bob fell in love and proposed a couple times and kept persevering before Martha finally said yes and they married in 1952. That wedding day launched a marriage lasting 63 wonderful years.

In 1956-57, Bob and Martha took on a major endeavor by purchasing wooded property about a mile from Matthews Beach. They worked long weekends and cleared only the trees necessary to build their home in the woods. They were dedicated conservationists and Bob was particularly fond of the native Trillium that grew in the woods and carefully protected the fragile flowers so that they expanded into a beautiful large patch of more than 60 blooms annually. They were thoughtful stewards of their 1 ¼ acres as long as they lived there. They and two other neighbors eventually were able to have their combined properties put into conservancy so they would be preserved in perpetuity. Later, Bob also built a rope and tire swing and a treehouse for the kids.

Creating Cartoons for a Living 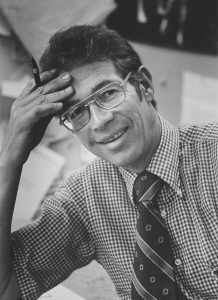 In 1956, Bob and seven other local artists joined together to create Graphic Studios and that original group stayed together until they started retiring some 25 years later. His bigger clients were Piggly Wiggly, Grandmas Cookies, Nordstrom, Grocery Boys, and Gais Bakery. One of the all-time great marketing lines Bob came up with was for Gais Bakery: “The loaf you save may be your own.”

Even though they had young kids, Bob and Martha had a very adventurous spirit and would leave the kids with babysitters when they were young and head out to Sun Valley and ski for a week! When the kids reached six years old, they were automatically enrolled in ski classes at Snoqualmie Ski Summit and they would all ski as a family every weekend during the winter. Bob and Martha were both ski instructors as well. During spring breaks, the whole family would go on skiing vacations and these were among the more memorable family times. The kids soon became expert skiers like Bob and Martha. 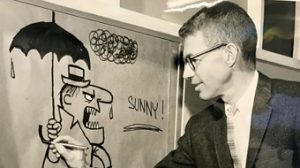 In March 1963, Bob started something that was going to make him an icon around Seattle. He was hired to be the weatherman for KING 5 TV and began to create cartoon characters that depicted the weather. Bob worked in this role until 1972 and was an award-winning Seattle illustrator for many years. He became a household name and his cartoon characters like Milli Bar, Onshore Flo, and Big Hi were adored by thousands of households throughout the Northwest. He soon became known as KING TV’s legendary “cartooning weatherman.” You can see some of his KING 5 cartoons by clicking here.

During these years, Bob managed long hours as he worked during the day for various companies coming up with cartoons and advertising ideas and then would go to KING TV for the 6pm news and weather program. He would then come home and have a late dinner, enjoy some time with Martha and the kids, only to go back in time for the 11pm news and weather program. He worked this ferocious pace until 1971. By then he was truly one of the most beloved iconic characters in all of the local news biz throughout the northwest.

From the mid-60’s to 1971, Bob also hosted 100 episodes of a popular Friday night TV show on KING TV featuring different ski areas in the great Northwest. The show was called “Ski Nanny” and was a big hit. One of Bob’s favorite interviews was with French athlete Jean-Claude Killy who won three gold medals in alpine events in the Olympics.

In 1974, Bob and Martha bought a cabin near Mazama, Washington and loved it. They essentially re-built the cabin and would go over for 4-5 months during the summer plus several extended winter trips there for cross-country skiing. The kids loved it as well. Through the 60’s and the 70’s, their growing family also enjoyed camping trips and would go for week vacations on the Oregon and Washington coasts. 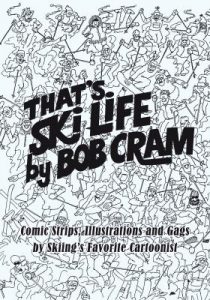 Bob authored several books on skiing that included his fun cartoons. He wrote The Jolly Skiers (1950), Here Come the Skiers (1971), You May Qualify as an Ancient Skier If… (2000) and That’s Ski Life: Comic Strips, Illustrations and Gags by Skiing’s Favorite Cartoonist (2013). His last book contained many cartoons from the 1940s-2000 and Bob wrote about himself, his career, and the back story behind many of these comics.

In 2005, Skiing Heritage Magazine had this to say about Bob Cram: “With sixty years of published work, Bob Cram arguably had the most productive career of any American ski cartoonist.”

In 2003, Bob was inducted into the Ancient Skiers Northwest Ski Hall of Fame. In 2015, the Washington State Ski and Snowboard Museum opened at Snoqualmie Summit and celebrated its second anniversary this month! At that museum, there is an exhibit featuring Bob and his many skiing cartoons on proud display.

Bob also wrote a book including his cartoons on golfing called “If Golf were the Only Game.” Amazingly, Bob was still playing golf up until 2 weeks before his untimely death. Bob also did books on backpacking and baseball. Even after reaching 91, Bob was still submitting cartoons to The New Yorker Magazine in what was ultimately an unsuccessful bit to be published (pooh!). 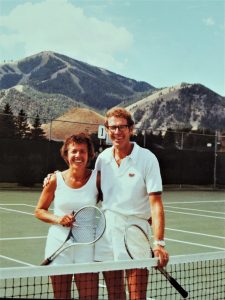 Bob and Martha had a wonderful run at marriage and were active together in skiing (including helicopter ski trips), golfing, and tennis. In fact, in 1988, at ages 63 and 60 respectively, they won the seniors mixed tennis doubles at the Seattle Tennis Club. Quite a feat against several other very competitive duos! Bob kept downhill skiing until his mid-80s when he had an Achilles injury. Martha had also experienced a serious leg injury years before so their skiing days were behind them. However, before those injuries stopped them, they probably had over 120 years of combined skiing between them!

Bob and Martha sold their home and moved into Horizon House in 2009 and Bob soon became known for his many cartoons that celebrated events and happenings here. Martha’s health declined in the next few years and Bob was a devoted husband and arranged his life around his beloved wife’s needs. Martha passed away on June 30, 2015.

Following her death, Bob became Co-Chair for the Philanthropy Committee for 2016 and 2017. His cartoon creations of “Lenda Hand” and “Help-along Cashidy” as part of the Partners in Caring Annual Fund were big hits with the residents. His sage words at Horizon House monthly resident and staff meetings about helping and caring for each other in our community always had an impact.

Bob’s creative and wonderful energy and zest for life is sorely missed. Horizon House thanks Bob for his wonderful, and at times, zany sense of humor, his thoughtful leadership, and for being such a wonderful part of our community here at Horizon House. We salute you, Bob!