The Life Story of Sara McVey

While we’ve had the opportunity to get to chat with our spirited leader Sara McVey over the last three years, we’ve never told the story of how she came to be. Keep reading if you’re intrigued by the life story of Sara.

Sara was born in Milwaukee, Wisconsin on April 2, 1968. Her mother Gail (1942 to 2017) did everything she could to delay Sara’s birth past April Fools’ Day. Gail was married to Sara’s father Jerry Klose, but the two divorced shortly after Sara was born. Sara joined siblings Joel and Kim who are both older by a few years and still despise this picture that remains hanging in the front hallway of their Mother’s home.

When Sara was a young child, Gail moved the family to a very small town called Shawano, Wisconsin. To make ends meet, Gail worked three jobs including a day job as the Administrative Assistant for the Shawano Lake Sanitary District, an evening job at The Ribs Restaurant as a bartender and finally, at one point, she managed the mobile home park where they lived. Whew!

Sara learned her work ethic from her Mom and recalls that Gail would bring the restaurant linens home and Sara and her siblings were required to take care of washing the ‘rib bibs’. Sara still has a favorite memory of washing the horribly stained napkin bibs that required extra effort. Thanks, Mom!

Sara attended St. James Lutheran School, for kindergarten through 8th grade, which was several miles away from their home in the country. Because of the distance and the fact that her Mom was working all the time, Sara often stayed with her Great Aunt Lucy Monday –Thursday. She would be with her Mom and family over the weekends.  Around age 13, Sara’s Mom met and married Clete Kling. Sara’s stepfather was a quiet and highly educated man who owned his own septic installation business—he’s still number one and two in Sara’s book. Thanks to Clete the family lived in a nice home and her Mom was able to work a more modest schedule and enjoy her beloved horses Drummer and Copper.

During the grade school years at St. James in Shawano, Wisconsin, Sara became active in music and loved playing the piano and the clarinet. Unfortunately, either because of her stepfather Clete’s overly sensitive ears or perhaps Sara’s musical “talent,” Clete ‘suggested’ that Sara practice her instruments outside in the front yard. That didn’t stop Sara from playing almost every day, even in the winter months!  This is why she enjoys the fervor of the resident-run OK! Chorale and the endless stream of programs where people sing, play instruments – not to mention the eve growing group of ukulele enthusiasts. 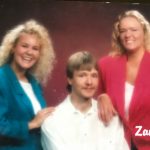 Sara next attended Shawano High School and her goal was to be part of any team. She played on the golf, basketball and volleyball teams, and joined the pompom squad.

Sara was a very social high school student. She was hesitant to share that senior year, her classmates voted her “Class Rowdiest” and “Class Clown.” She did not, however, advertise these particular accomplishments in her resume when she was applying to be CEO at Horizon House. One of her memorable moments as a student occurred when she was a little bit too chatty in class and the teacher sent her to the Principal’s office. Her punishment was to face the wall for 15 minutes. Sara was undeterred. She remained chatty.

While in high school, Sara found her calling working for Dairy Queen. She worked a lot of different jobs at DQ, and kept getting promoted until she reached Shift Manager, which put her in charge of other employees and the grill.

Sara was able to maintain her good grades even while working at DQ; she made honor roll and graduated in 1986. Sadly, her cooking skills remain minimal at best.

Sara almost didn’t go to college. In high school, she submitted exactly zero applications to colleges during the application season. Instead, one spring day in senior year, Sara was invited by a friend’s father to travel with them to the University of Wisconsin-Oshkosh. Once on the campus, Sara liked what she saw, but had no money to apply to the university. Her friend’s dad encouraged Sara to still fill it out and gave her the $50 for the fee. Sara subsequently was admitted. Without that gesture and the support of her stepfather, Sara could still be working at the DQ in Shawano – which is still there by the way.

Her major was Mass Communications (TV, radio and writing classes) plus Health Education. She loved living in the dorms and hanging out with friends. She even had a nice boyfriend who bought her an Alpine Sunbeam Convertible, which Sara absolutely cherished…the car that is. Sara worked as a waitress, taught aerobics and worked as a morning pre-loader at Federal Express five days a week.

Notwithstanding all these activities and jobs, Sara obtained excellent grades and was on the Dean’s List until she graduated in 1991.  She wanted to stay, loving the idea of learning, however, her stepfather told her to get out and get a job.  Wise words from a wise man. 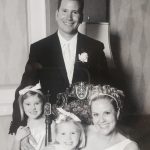 Following graduation Sara worked a series of different jobs. First she worked at Enterprise Rent-a-Car and had a great boss who saw leadership potential in her and she was promoted to open up and manage a couple Enterprise Rent-a-Car offices in Green Bay and Appleton, Wisconsin. After Enterprise, Sara went on to a very diverse and interesting career in marketing and advertising; her first job was as a copywriter at Pyramid Marketing and Advertising, followed by an Account Director position with The Laux Agency. From there, Sara moved on to The Food Group in Chicago, which was a major step up for her in the marketing world and the big city. Her first time on a four lane highway and airplane occurred in  her 20’s. The senior living affiliate of Hyatt then recruited her to lead marketing efforts for multiple communities across the country. She was then offered an opportunity to move to Scotland and lead sales and marketing efforts for the Carnegie Clubs where she had responsibility for membership of Skibo Castle in the Highlands, as well as,  a boutique hotel in London, close to Cadogan Gardens.

In 2001, Sara met Andrew McVey at a wedding in Chicago and a long distance romance by email and phone calls ensued, with Sara in Europe and Andrew in Chicago. Ultimately, love blossomed and they got married in 2003.

After moving back to the United States, Sara worked for Mather LifeWays (MLW) from 2003 to 2015 (with a short stint at Vanguard Healthcare Systems in 2012-13). Sara held various leadership positions there – opening a new CCRC in Evanston, Illinois best prepared her for life at Horizon House. During her tenure with MLW, she also oversaw the Mather LifeWays Institute on Aging, which does research and education—working with customers both domestically and internationally. While at Mather LifeWays, she was also encouraged to get a Masters. She attended the University of Chicago and worked full time while taking classes Friday-Sunday. She credits the caliber of leadership during her time at Mather Lifeways and Classic Residence by Hyatt for her love of the senior living industry and she credits her mother Gail for her sense of humor and courage –essential core values regardless of the profession you pursue. 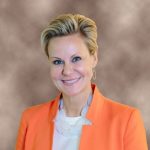 Sara had heard of Horizon House and knew of Bob Anderson, previous CEO, by reputation, as he was part of a group of CEOs who met periodically around issues of innovation. When Sara came here to interview in the early spring of 2015, she had wonderful interviews with the Executive Team, the Board of Trustees and the Residents Council. Her first impressions told her this was the right place for her. She was selected by the Board and started work on June 3, 2015.

When asked about what she enjoyed most as CEO, Sara said that this was difficult to answer as there are so many bright spots here at Horizon House.

“I am in awe of the staff—the work they do is so important and I know some days can be hard, yet they always have a smile and kind word,” she said. “I have also been invited into the vitality of Horizon House in a way that has expanded my life. The Board of Trustees takes time to reach out to me individually and offer advice from their careers which I am able to apply to our work today. Residents invite me into their homes and I get to celebrate monthly birthdays in the Sky Lounge! Residents tell me books to read, theater to see, and places to go in Seattle, and they never lead me astray.” 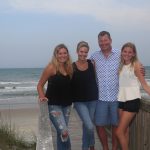 Now that Sara is in her third year as CEO, she added, “I have fallen in love with Horizon House and like any important relationship I need to make sure I have an attitude of gratitude, listen and hear, know when to apologize, and every once in a while you may see me taking out the garbage without being asked.

She’s involved in the Seattle community participating as a Board member with the First Hill Improvement Association (FHIA), serving as a member of the Virginia Mason SAC Committee, supporting KCTS Channel 9, being the Secretary of WOW (Women of Washington Athletic Club), and an enduring fan of the Green Bay Packers and all things yoga-related.

Sara and her husband Andrew make sure to talk daily and have learned the value of spending quality time together.

Her stepchildren, Claire (18) and Madison (20) are now both attending the University of Boulder. You will likely to continue to hear stories about the kids accomplishments.

Finally, it’s rare that you see Sara without a smile on her face, she likes to say, we have way more belly laughs than belly aches at Horizon House.  Those are some good words to live by.