Each month, Horizon House tells the stories of residents and staff. This month, we feature resident Dominic Huang. 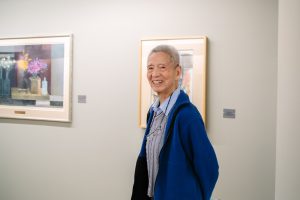 Dominic was born in Fujian, China during the Sino-Japanese war. Japanese bombardment destroyed his home and bankrupted his family. He was the only one among his siblings able to complete high school. In 1948, he was unable to even dream of attending university, so he took a summer job as a caretaker in Taiwan. It was a fateful move. That was the summer the Communist Party took control of his home town. Dominic could not return. He later entered the National Taiwan University, and came to America in 1958, with the help of his six classmates who had gone on to America before him and pooled their resources to get him to the United States.

From caring for sick people, teaching in elementary schools, tutoring high school students, and washing dishes to earning a B.S. in Civil Engineering at National Taiwan University to an M.S. at University of Illinois, to a PhD. at Yale University and on to Emeritus Professor at Kansas State University was often a bumpy, but nevertheless rewarding path. In 1994, the International Biographic Center of Cambridge, England, named Dominic as its “International Man of the Year.”

What most residents don’t know about Dominic is that he is an award-winning engineer scientist who participated in the design of the longest suspension bridge in the world, conducted research at NASA Manned Space Craft Center, is an author of three books and 187 technical articles and is the father of a daughter and three sons, who all hold degrees in medicine and engineering.

Outside of Horizon House, Dominic is Dr. Chi-lung Huang, whose greatest satisfaction has been teaching and shaping the expertise of future engineers. He has presented his research in conferences throughout the United States and Canada, as well as in Asia, Africa, the Far East, and Australia.

His work as been cited in many technical papers, textbooks, and research monographs. He writes and speaks Taiwanese, Cantonese, Mandarin, and English. Today, Dominic calls himself a fortunate man. His friends and neighbors at Horizon House call him the world’s nicest man.