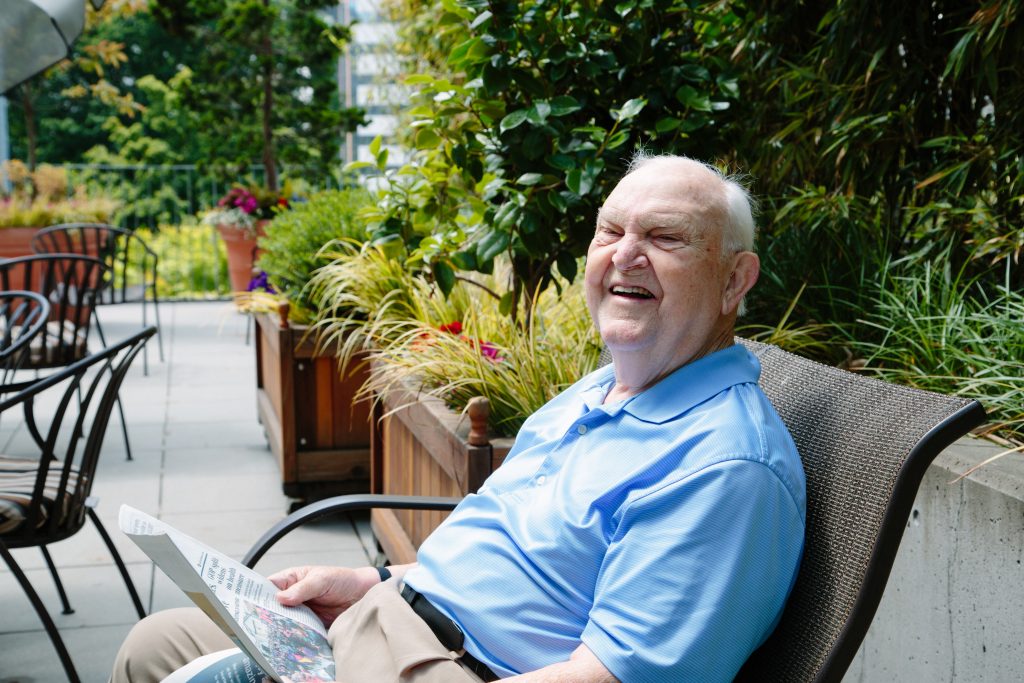 Floyd Jones, an iconic philanthropist and Horizon House resident, passed away on January 5, 2018. He was 90 years old. Floyd’s life was a true “rags to riches” story that was nothing short of remarkable.

Floyd was born in Arkansas on October 4, 1927 as the eleventh of twelve children. His mother and father were dirt poor and the whole family lived as sharecroppers. He moved to Missouri when he was four and for the next fourteen years, he and his family picked cotton and other crops and eked out a bare existence. Floyd recalled that his family was as poor as any family around and a lot of times they had virtually nothing to eat.

But Floyd had ambitions and dreams of working hard to escape this miserable poverty of the Depression years and wanted to become successful. He knew education was the key. Amazingly, Floyd could only attend school for a few months of every year. He and his siblings had to work the fields in early spring to help get the crops planted, then labored during the summer and finally worked hard through the fall to bring in the harvest. Floyd could only attend school from about mid-November until early March. But Floyd was smart and his teachers could see his determination and he passed every grade.

Floyd had a particular teacher who had a real impact on him. Her name was Ms. Ruth and she was a high school teacher. She introduced Floyd to the classics in literature and also to what was to become a lifelong passion for him–writing poetry. Against great odds, Floyd graduated from high school in 1946—the only sibling in his family to accomplish that feat.

Floyd enlisted immediately into the Army knowing that the GI Bill could help him with his goal of attending college. He enlisted for a two year stint and at one time, one of his commanding officers recommended Floyd for an appointment to West Point. Floyd declined because he did not want to pursue a military career. After his two year stint, Floyd attended Humboldt College in California and pursued business administration courses. After Humboldt, the Korean War had started up and Floyd was still in the Army Reserves and served his time at Ft. Lewis in Tacoma.

During his time at Ft. Lewis, Floyd met his future wife Delores Haglund at a friend’s wedding in 1952. A whirlwind romance evolved and they were married in 1953. Floyd went on to the Business School at the University of Washington and majored in international trade and business. During part of that time Floyd pursued a brutal schedule working the night shift at Boeing, finishing at 7 a.m. and then attending morning classes at the UW. He managed to complete his studies on time in 1954 and obtained a Bachelor’s Degree.

Beginnings of a Career

Floyd was hired by Dean Witter as a stockbroker and that started an amazing career. Over the years, Floyd became very good at selecting stocks for his clients and himself. His favorite stock of all time was Berkshire Hathaway (Warren Buffet’s company) and he purchased his first shares in 1985 and then convinced many of his clients to do the same over the years. He worked very hard in the business and helped his clients achieve significant wealth. Over the years, Floyd became good friends with Warren Buffet and attended many annual meetings.

During these years, Floyd and Delores also concentrated on raising a family with Laura born in 1957 and Steven in 1958. They became very involved with their children’s activities and they were a very close family. They lived for several years in Tacoma and then briefly in Denver before making their family home in Lake Forest Park. They also loved their second home on Camano Island.

During these years, Floyd and Delores could have lived a much more affluent lifestyle but chose to live their values and share their resources with various social justice causes giving to groups like the ACLU and the NAACP but also other organizations like KCTS 9, their Unitarian Church, Floyd’s Rotary Club, and the Union Gospel Mission.

The Virginia Mason Cancer Institute they helped fund with a $2 million gift was dedicated on May 15, 2005. Ironically, Delores, who had been struggling with cancer on and off for several years, attended the dedication, but died two weeks later. After Delores passed, Floyd gave another $20 million to the Institute.

Floyd continued to work as a stockbroker and was part of his son’s brokerage firm. He continued to walk to work almost every morning up until late fall, 2017. He still had a number of clients.

In the past year of his life, Floyd decided to give away much of his wealth by making legacy gifts to more than 20 local nonprofit organizations. These gifts are going to many of the organizations above as well as others. These gifts will provide millions of dollars to support higher education, healthcare, public media, justice, shelter and assistance and food to feed the hungry. Floyd also included Horizon House in his remarkable legacy giving.

Floyd said recently during an interview with Enrique Cerna of KCTS: “If I had to do it all over again-so help me—I would do it the same way… even the cotton picking. I always wanted to do good and be good and do the right thing.”

Rob Dunlop, the President and CEO of Cascade Public Media, says, “Floyd was one of our region’s true heroes. We are grateful to have known this giant of a man. He lived a life that put others first, using his success to support organizations throughout our region in profound ways that will have an enduring legacy for all of us.”

KCTS also created a video about the legacy left by Floyd, which includes an in-depth, on-camera interview with Floyd.

Floyd was a member of the Philanthropy Committee and the Heritage Society of Horizon House. The Society recognizes those who have made a philanthropic commitment to Horizon House through a planned gift like a will bequest or charitable gift annuity. He cared about Horizon House and the residents and staff who worked there.

“Floyd would always say that ‘Philanthropy is sweetness for the soul.’ He was a wonderful supporter of our Residents Assistance Endowment and believed in the mission of helping others in our community who were in need,” said Dave Spicer, Horizon House’s Philanthropy Manager. “Floyd would also tell me that he had worked hard and done very well but he felt a ‘moral obligation’ to help others. He never forgot his roots and where he came from and wanted his philanthropy to live into the future long after he was gone.”

Horizon House resident Grant Hildebrand is the author of “An Unusual Philanthropist,” a poignant and wonderfully written book about Floyd as well as the buildings and architecture that were made possible by his philanthropy. Grant collaborated with Floyd in sharing this story and profits from the sale of this book went to the Employee Education Fund which provides educational scholarships for staff.

For his 90th birthday in October 2017, Floyd, in his nature, gave back to those around him. He created a book of poetry and gifted it to everyone at Horizon House. The book includes poems written and selected by Floyd.

Inside the front of the book it reads: “Among those who know him, Floyd Udell Jones is often considered this century’s Walt Whitman. As Jones’s poems become better known, it seems likely that Whitman will soon be considered the nineteenth century’s Floyd Jones.”

One of Floyd’s favorite poems was called Spring Plowing, which reminded him of the farm in southeast Missouri.

Kildeers run ahead and feign a broken wing

Bees are busy with a season’s work to do

Bluebirds are singing a mating song,

their spirited gait suggests they know

Floyd ended his book with a poem titled “The Sound of Trees” by Robert Frost. It seems fitting to now repeat the last lines:

Sometimes when I watch trees sway,

From the window or the door.

I shall set forth for somewhere,

I shall make the reckless choice

Some day when they are in voice

And tossing so as to scare

The white clouds over them on.

I shall have less to say,

But I shall be gone.

Though Floyd may be gone, he is remembered fondly by all who knew him at Horizon House as well as the organizations throughout our community that have become the grateful beneficiaries of his charity. Floyd, you were truly one of a kind. We will miss you deeply.