Getting to Know You: Stu Williamson

Each month, we focus on a resident. This month’s (auto)biography features Robert Stuart Williamson.

Robert Stuart Williamson, generally addressed as Stuart or Stu, was born in July, 1918, shortly before the end of World War I, in Alberta, Canada. He grew up in Calgary, in the foothills of the Canadian Rockies, a city of about 60,000 at that time. The 20s and the 30s were hard times, but his Scottish-born father was steadily employed as a traveling salesman, and so owned a car, then infrequently a possession of middle-class families. His childhood, he says, was “almost story-book happy” with always good food on the table, lots of friends, and weekend camping trips or family picnics beside a creek in the countryside. He loved education and in high school was immersed in a multitude of activities: theatrics, music, art, debating, and was editor of the monthly school paper. His family could not afford university tuition, so he studied Art at the Provincial Technical School and worked in the display shop of a large department store. 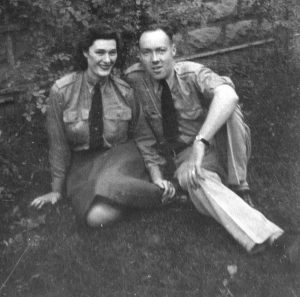 World War II came to Canada in 1939 and Stu enlisted in 1941, after being twice rejected by the Air Force. Around that time be met Patricia Howarth on a blind date. They were married in Toronto in 1944 while both were in uniform – a marriage that lasted 66 years. He served with the Royal Canadian Signal Corps in the Netherlands and Germany, continuing into the Occupation, receiving his discharge and returning to Calgary in 1946. In 1949, unable to find a course in Industrial Design in Canada, he was accepted by the Center College in Los Angeles, one of only two Industrial Design Schools in the U.S.

After graduation, he worked for the Douglas Fir Plywood Association in Washington D.C. That was the time of the Korean War, and plywood was gaining acceptance in Small Boat construction in the Navy, shipping with Army Transportation, and bridge and other light construction with the Corps of Engineers. Their only daughter, Ruth, was born at that time. Transferred to New York City in 1954 to manage the DFPA field force, he resigned to join a former classmate in a commercial art studio in Manhattan. Their special field, slide projection presentations, led them into full production for Annual Meeting presentations for National Sales and Stockholder Meetings, where hundreds of franchise owners, regional sales managers, and investors were shown the company’s programs for the coming year.

This evolved to lead him away from the pictorial field into working at the top level in such companies as Johnson and Johnson, Pepsi Cola, General Foods and Eastman Kodak, where he wrote speeches for top executives whose future careers rested to a substantial degree on the effective articulation of their strategies, new products and ability to gain the enthusiasm of their sales forces. When his partnership ended, he continued working on special assignments with marketing executives of some of these companies, particularly Eastman Kodak. Their son, Robert, was born during this period.

In 1965, he was offered the position of Manager of Specialty Plywoods by the Weyerhaeuser Company. Wishing to return his family to the West Coast, he returned to Tacoma, where he worked seven years, and then was terminated by the elimination of his Department as a cost-cutting measure. Two years later he became Vice-President of Marketing for the Z Brick Company, manufacturers of a decorative interior wall covering product, struggling to gain distribution in a highly competitive do-it-yourself home improvement field. Within two years it had national distribution and by its third year had over 75% of sales in its category. He then became Vice President Sales and Marketing for the Shakertown Corporation, makers of cedar siding products. There, he led the acquisition of Spectrum Glass, a stumbling start-up producer of glass for stained glass professionals and hobbyists. With aggressive design, promotion, and distributor aids, he brought Spectrum to the world’s largest producers of art glass, with worldwide distribution, 89% of the hobby market and 40% of the professional. 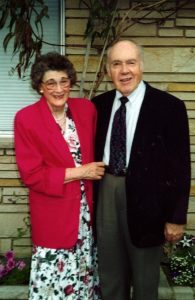 When Stu reached 75, he retired, and then incorporated under the name Winmark and worked as a consultant and importer. He provided the branding, packaging, advertising and promotion for LWO Corp. of Portland, manufacturer of cedar lattice, who he also launched into Arboria, a line of arbors and garden furniture. He also took a small producer of big band saws in Bellingham to national dominance in both band saws and round saws for lumber manufacturers, working with them until 2007. During these last years he was also importing a line of glass cutting equipment and specialty garden pruning tools, selling both off in 1996. In those years he travelling to Taiwan and South Korea at least three times a year and gained a great affection for both countries. He worked as a consultant until he was 90 years old. 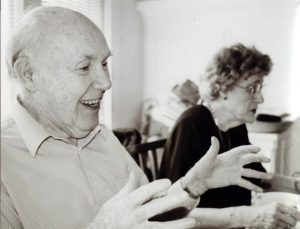 Stuart and Pat moved to Horizon House in January, 2003. They both plunged into bridge, the Sunday musicale, and the library and the art committee. Stu was appointed Chair of the Art Committee in 2006, and spear-headed, with Phyllis Lamphere, the commissioning of the mural above the staircase and the acquisition of the major pieces in the Main Lobby and the Fireside Lounge, and the adjacent halls. He also championed the acquisition, through GEM grants, of reproduction art for all residential corridors, which had previously been restricted to the elevator lobbies and hall ends. With later grants he led the acquisition of the Northwest Artist collection in the Central corridor and the commissioned works in the Bistro / Dining Room as a part of a remodeling project. He chaired the Art Committee from 2006-2010.

Patricia passed away in 2012. Their two children live in Seattle, as do their four grandchildren. 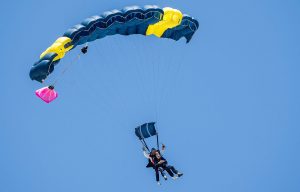 Just turned 100, he still paints in the Art Studio and continues as a stalwart on the Sunday Musicale Committee. His major interests include art, archaeology, history and keeping fit in the Wellness Center. Amazingly, Stu also likes to sky dive out of airplanes having done it for both his 99th and 100th birthdays!