Getting To Know You: Drucilla Briggs

Each month, we focus on a resident’s story. This month, get to know more about resident Drucilla Briggs. 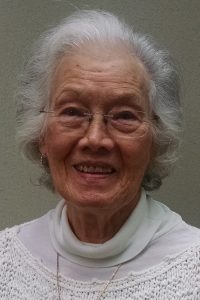 Drucilla Briggs was born in a blizzard in a Grant County orchard on the banks of the Columbia River. The nearest town in this north-central section of Washington State was Bridgeport. Her dad was an orchard foreman, which meant their family of six moved a lot. Drucilla remembers a couple of houses they lived in lacked running water; another two had no electricity, but her mom “always made things work.” Both her parents came from pioneer families. Although her dad only attended school through eighth grade followed by a stint in the Navy, her mother graduated valedictorian of her Bridgeport High School class, instilling an early and long-lasting love of education in Drucilla.

After graduating from Okanogan High in 1947, Drucilla attended a small evangelical church college in Oregon for a year and Seattle Pacific University from 1949-50. She then had to set her studies aside for financial reasons, but she promised herself that she’d get back to school one day. In the meanwhile, she met her future husband Jim while she was on a blind date with another guy! Ten days later they were engaged; they married in 1953 and lived in Nebraska, California, and finally Bellevue. Jim was a PhD industrial psychologist for Boeing, an expert in visual perception who worked on the then-secret U-2 project. They had two boys, and because of Jim’s work schedule, Drucilla was largely responsible for raising them. Over the years, she also worked as a model, a dental assistant, and in retail.

When the boys were teenagers, she kept her promise to herself and returned to school part-time at Bellevue Community College in 1973 – along with many sister homemakers who had suspended schooling and careers. She became interested in student body politics, felt it was important for women to run for office, and was elected Associated Student Body President. As a result, she served on Governor Dan Evans’ Alternatives for Washington task force to study the 10-year future plan for the state. She was also appointed to the American Association of Community and Junior Colleges for two years. Following her AA degree, Drucilla attended the University of Washington and graduated with a BA in Political Science in 1978 – the same year her son Vaughan graduated from high school.

Retaining her interest in politics, Drucilla ran for a seat on the Bellevue City Council in 1979 and won. She served one four-year term – a fascinating experience. These were the years in which the Council purchased the land for Bellevue’s downtown park. She also worked with METRO and the four-county Council of Governments. Tragically, her eldest son died in an accident in 1984. She was devastated, and at the urging of a friend, became involved with the Salvation Army, serving on their Community Advisory Board, specifically their social services committee, for six years. Drucilla was part of a group that successfully petitioned the Salvation Army to open on the Eastside, in the Crossroads area. The temporary structure they erected there finally became permanent this January, providing all kinds of social services, particularly meals for women and children. In 2016, during Bellevue College’s 50th anniversary, Drucilla was honored as one of its “Exceptional 50” for her service as ASB President. In her term, she helped establish a student parent childcare center, which then expanded to become a student parent/teacher childcare center and eventually evolved into an early childhood development department.

When Jim retired in 1996, he and Drucilla moved to Anacortes to be close to the boating, scuba diving, hunting, and fishing he loved. The Briggs came to Horizon House in 2010. They were together in Independent Living for a couple of years; Jim then moved into Supported Living due to declining health, passing away in 2014. Here at Horizon House, Drucilla has been involved in governance. She has served on the Residents’ Council. As Drucilla says, “There’s a lot to learn,” but she’s climbing that learning curve, having fun, and enabling her neighbors to do the same.